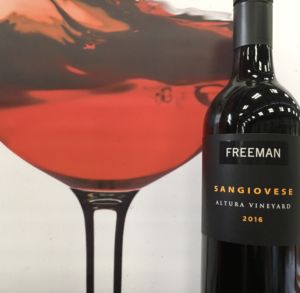 Esteemed wine observer Philip White has cracked his bottle of FREEMAN Robusta 2012 – and been transported to Shakespearean times.

‘ …A world of opulence and style, where the polished sheen of the drink hides the great aristocratic engine whirring within; where the complex panforte aromas of currants, figs, dates, prunes, nutmeg, mace, citrus rind and whatever are presented in such a finely-homogenised and harmonious syrup you simply cannot win … you name any luxurious item from the table of a renaissance monarch in Verona and it’s here with bells on.

In summary, Philip White sees this new addition to the portfolio as a ‘wine of incredible strength and depth that doesn’t seem gloopy. Instead, it’s savoury. It makes me hungry…’

For the full Renaissance rendition read on:

The FREEMAN Robusta Corvina 2012 continues to attract attention. The latest practised palate to  review this powerful dried grape wine is Huon Hooke who scored it a feisty 92 Points and wrote,

‘The bouquet has some foresty soubois notes as well as red berries, the palate fruity and fresh; clean, bright and loaded with berry flavours. Lovely sweet raspberry and cherry…backed by good tannins….Delicious wine.’

Brian’s latest brainwave is FREEMAN Robusta Corvina 2012, which has 16.6% alcohol – but you wouldn’t guess it when you taste it. A spectacular red wine.‘

He goes on to say,

‘Freeman Robusta tastes of cherries, chocolate and Christmas pudding. It has a heady 16.6% alcohol but it carries it comfortably, finishing dry and savoury. It swats aside most Shiraz like Jonah Lomu used to do with Englishmen. A meal in itself. This is the inaugural release but Robusta could become an Australian classic.’

‘One of the finer expressions of this variety in Australia, this well-constructed nebbiolo flaunts its restrained power and strength. A faintly herbal bouquet laced with fresh and preserved plums and cherries, nuances of dried herbs, red flowers and Puer tea reveals a whiff of cedary oak.

Fullish to medium in weight with a powerful core of pristine fruit wanting to explode, it’s framed by a firmish, bony spine and drives long down the palate towards a finish of freshness and balance.’

Conjuring wine scores over 95 from wine writers is a relatively rare event, to attract 95-plus concurrence from more than one wine reviewer, even harder. All of which makes the FREEMAN Secco Rondinella Corvina 2010 a high achiever.

Tim White ranted this wine 95 Points and declared it his Financial Review 2015 Red Wine of the Year. While Huon Hooke rated it 96 Points in Gourmet Traveller Wine. ‘ Attractive complex leather and spice aromas with hints of violets, dried cherry and plum. It’s an intense and elegant wine with a combination of grip, structure and flavour, that is all its own. Will age well.’

A recent bottle drawn from the winery cellar is living up to the claim.

11 May STRONG START FOR ROBUSTA

Just launched the FREEMAN Robusta Corvina 2012 has packed a punch with the Winefront team. Mike Bennie rates it 93 POINTS and uses descriptors like ‘ Cracking wine..’ and ‘Super Stuff…’ It is Australia’s first and only home grown 100% Corvina wine made entirely from dried grapes, and joins a very small club. Very few Italian Amarone wines are pure Corvina. More lateral thinking from the FREEMAN team.

The annual Gourmet Traveller Wine Cellar Door Awards have again recognised the unique and rustic experience of a visit to FREEMAN in the NSW Hilltops (near Young). The 2017 Award is for ‘BEST TASTING EXPERIENCE’ in the region…and in winter it may be accompanied by a steaming bowl of soup and crusty bread.

As Prunevale is not on a beaten track we prefer visitors to make appointments for TASTINGS. That way we can ensure you take home memories with your wine. 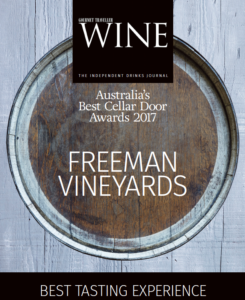 ‘If this wine’s pretty pale straw meadow aromas and delicate waft of honeydew melon oozed from a flute of the sparkling wine made in that part of France they call Champagne you’d be happily paying at least three times this price, so that’s a dollop more incentive if this fetching bouquet doesn’t suck you in far enough.

It’s a husky, freckled sort of a blonde. In keeping with that, the wine has a gentle pale flesh, inbuilt deliberately by fermenting half the assemblage in barrels and keeping that wine on yeast lees for regular stirring. So you get comforting texture made more reassuring with a barely-detectable sweetness, delivered in a slightly prickly, petillant fizz that dances right bonnie to a bagatelle of crunchy almond biscotti. I imagine my Ferrari ticking impatiently outside when I drink this.’

‘Good deep colour and shows savoury aromatics of blackberry with leather and earthy complexity. Dry, quite powerful, full-bodied and acid driven, it is a structural style with layers of fruit, character and dry, grainy tannins to match. Demands food and or time.’